The area of ​​the territory included in the perimeter of the Park is about 3,500 hectares. This territory includes the Via Appia Antica and its adjacencies for a stretch of 16 kilometers, the Caffarella valley (200 hectares), the archaeological area of ​​the Via Latina, the archaeological area of ​​the Acquedotti (240 hectares), the Estate of Tormarancia (220 hectares) and that of the Farnesiana (180 hectares). The perimeter of the Park is bordered to the north by the walls of the Aurelian Walls of Rome, to the west by the Via Ardeatina and the Rome-Naples railway, to the east by the Via Tuscolana and the Via Appia Nuova to Frattocchie, while to the south it touches the village of S. Maria delle Mole and the Fosso delle Cornacchiole on the edge of the archaeological site of Tellene. The municipalities affected by the park area are Rome, Ciampino and Marino. For geography lovers, the coordinates of the Park are: - 41 ° 50 '00 "latitude N - 12 ° 33' 00" longitude E. The maximum altitude is 189 meters above sea level in Frattocchie in the south part of the park . 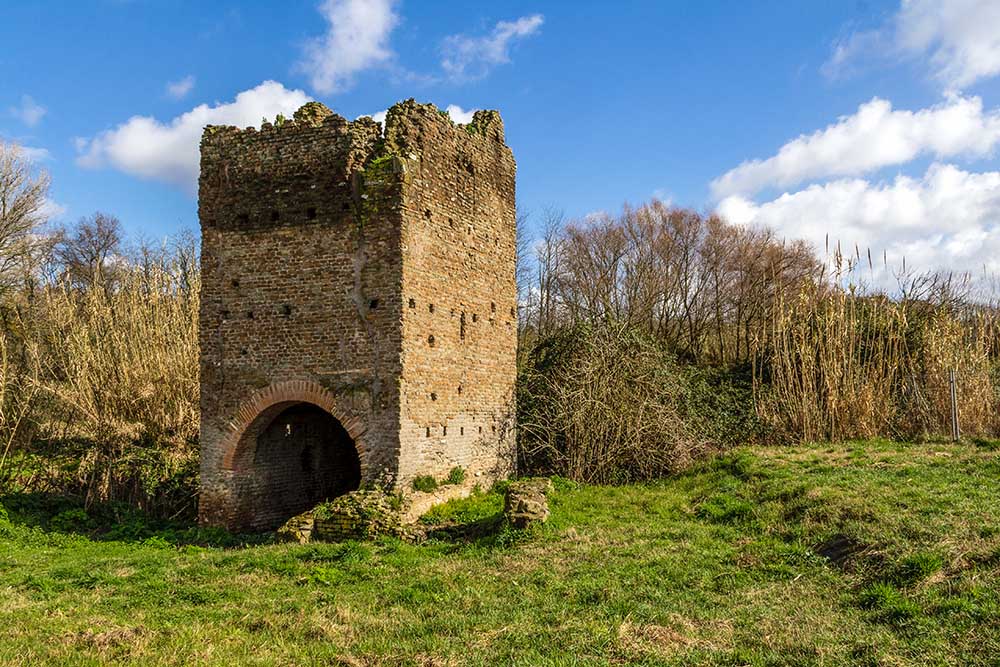 The Regional Park of the Castelli Romani is a protected natural area of ​​the Lazio Region which is located in the Colli Albani area, in the province of Rome. The municipalities that are part of it are 15. This regional park of naturalistic and artistic interest extends in the area of ​​the ancient Latium Volcano. Many of the municipalities of the Castelli Romani share protected areas of the park, among which stands out Nemi, whose territory falls entirely within its boundaries. Of particular interest are the archaeological site of Tuscolo, as well as the many Tuscan villas. The park also includes Lake Albano (also known as Lake of Castel Gandolfo) and Lake Nemi. The Park of the Roman Castles was established by the Regional Law 2/1984 in order to protect the integrity of the natural and cultural characteristics of the fifteen countries (Albano Laziale, Ariccia, Castel Gandolfo, Frascati, Genzano di Roma, Grottaferrata, Lanuvio, Lariano , Marino, Monte Compatri, Monte Porzio Catone, Nemi, Rocca di Papa, Rocca Priora, Velletri) that occupy the ancient Laziale Volcano. 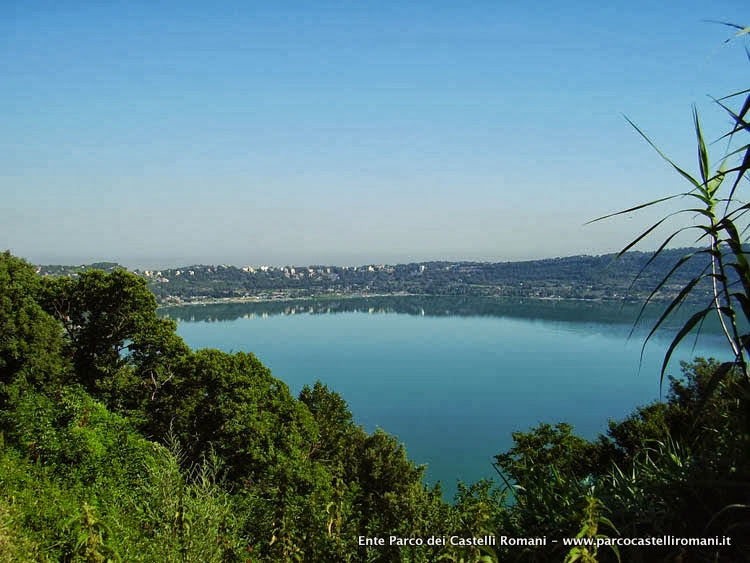 The Regional Natural Park of the Lucretili Mountains is a protected natural area of ​​the Lazio region established in 1989. The regional park, partly still unspoiled, covers 18,000 hectares and its main nucleus consists of the Lucretili Mountains. The highest peaks are Monte Pellecchia (1368 m) and Monte Gennaro (1271 m). The territory of the park includes 13 municipalities that belong to two provinces (Rome and Rieti) and three Mountain Communities (XI, X and XX). Below are the Municipalities belonging to the park: Licenza, Marcellina, Monteflavio, Montorio Romano, Moricone, Orvinio, Palombara Sabina, Percile, Poggio Moiano, Roccagiovine, San Polo dei Cavalieri, Scandriglia, Vicovaro. The Park still preserves many wooded areas including beautiful beech woods. Present rare plant species such as the sturgeon (Styrax officinalis - symbol of the Park) and the Iris sabina. As for the fauna to note the "return" of the wolf and bear and the nesting of a pair of golden eagle on the slopes of Monte Pellecchia. 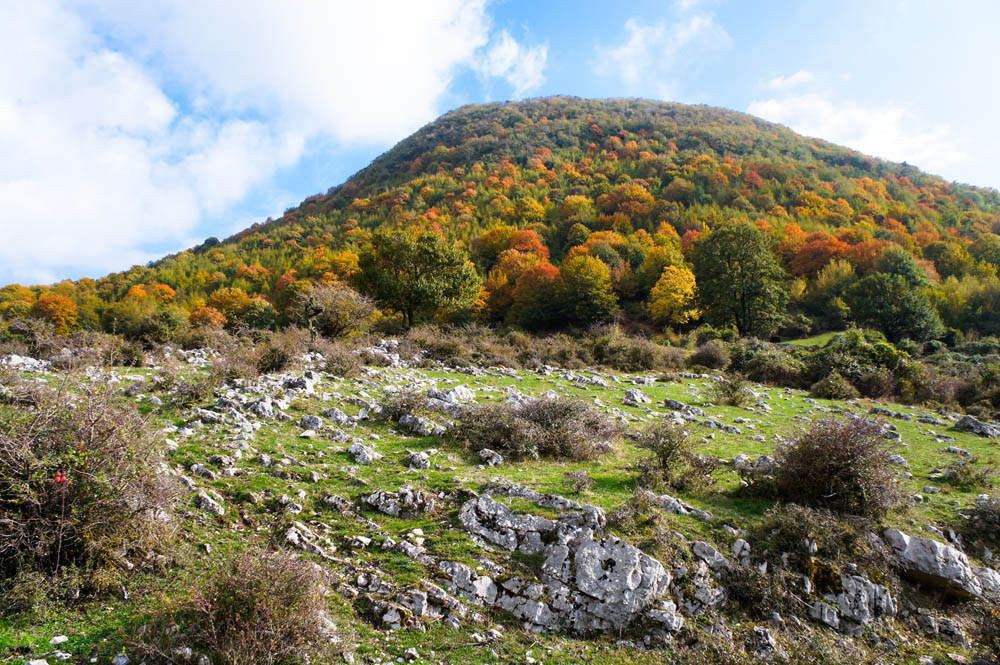 The territory of the Simbruini Mountains Park is part of the Apennine system and includes seven municipalities: Trevi nel Lazio, Filettino, Vallepietra, Jenne, Subiaco, Cervara di Roma and Camerata Nuova. The official act of birth of the Park is dated January 29, 1983. The area of ​​the park is home to many animal species typical of the Apennines. There are populations of wild ungulates, such as deer, wild boar and roe and are an important source of food for the wolf specimens present in the territory. There are also reports of the presence of the Marsican brown bear. Other important mammals are: the wild cat, the moscardino, the marten, the skunk, the marten and the porcupine. In the park there are also numerous species of birds: the golden eagle, the white-backed woodpecker, the coral chough, the rock partridge. In the springs and wetlands there are many species of amphibians: the newt, the salamandra spotted and the salamander with glasses. Reptiles are also very well represented, with various species including the collar snake, the rat snake and the common viper. Finally, it is necessary to mention among the invertebrates the large quantity of insects that inhabit practically all the environments of the park, passing from the lepidoptera and the cerambids up to the orthoptera. 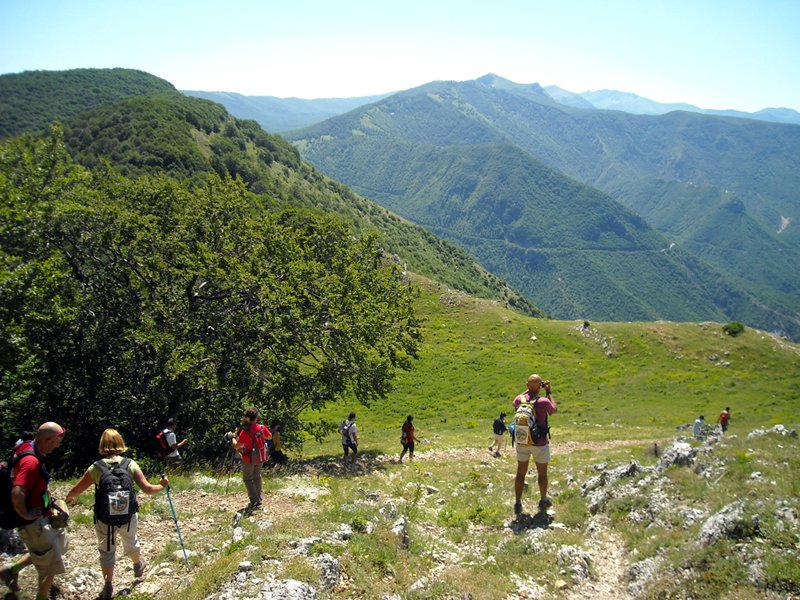 The Regional Nature Reserve of the Navegna and Cervia Mountains, located in the province of Rieti, covers about 3600 hectares within the catchment areas of the Salto and Turano river, affecting the territory of as many as 9 Municipalities: Ascrea, Castel di Tora, Collalto Sabino , Collegiove, Marcetelli, Nespolo; Paganico Sabino, Rocca Sinibalda and Varco Sabino. The Nature Reserve is characterized by the presence of woods of beech and mountain forests and submontani, the bushy pastures that are turning into young woods, secondary grasslands on the tops of the mountains, the chestnut trees, the carbonate walls that frame the some torrents, ending with the "landscape of the dams" originated from the construction, at the end of the 30s, of the artificial reservoirs of the Salto and the Turano. The protected area includes the mountains of Monte Navegna (1508 meters above sea level) and Monte Filone to the north, and the Monte Cervia (1438 meters above sea level) stands out from the Fosso dell'Obito, an extensive mountain ridge that is interrupted by deep gorges of the Fosso di Riancoli. To the south of this valley is Monte San Giovanni. The south eastern sector of the Reserve, separated from the previous area, consists of the reliefs that surround the village of Nespolo and which constitute the regional border with Abruzzo. 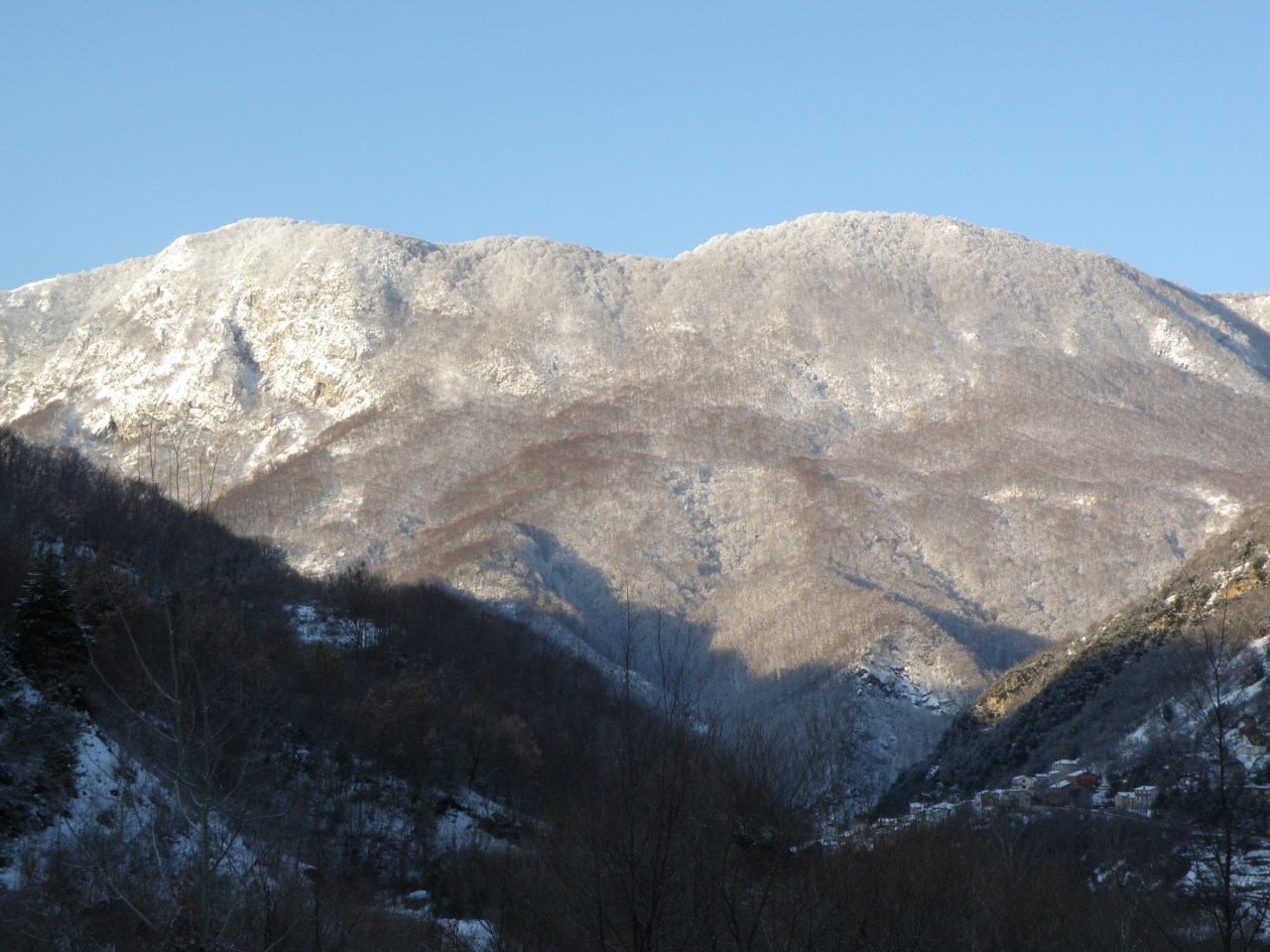 The "Montagne della Duchessa" Regional Nature Reserve has an area of ​​over 3.540 hectares, represented by a mountainous territory, with rugged and wild morphology, dominated by Mount Morrone (2141 m) and by the Murolungo (2184 m). The landscape is quite suggestive and varied; rising from altitude, from the 950 m asl of Valle Amara and Cartore, the mixed woods of Turkey oak, ash, hornbeam, rowan and maple leave the place, above the 1200 m., to the monumental beech-woods. The highest peaks are dominated, from perennial pastures and wide rocky surfaces where even plant life becomes difficult. From north to south alternate deep and narrow valleys to more or less bumpy mountains: at Monte Cava (2000 m asl) it follows the deep valley of Valle Amara which, in the summer is an important access to the Reserve, in winter often results impracticable because, by collecting the torrential waters that "channel" into the valleys placed at higher altitudes, it is transformed into a real river bed. It follows the emergency of Monte Morrone and then again the Vallone di Fua and the Vallone del Cieco that introduce the enchanting and uncontaminated Lago della Duchessa (1788 m asl). Further south the Murolungo dominates the Vallone di Teve with its rocky spurs. 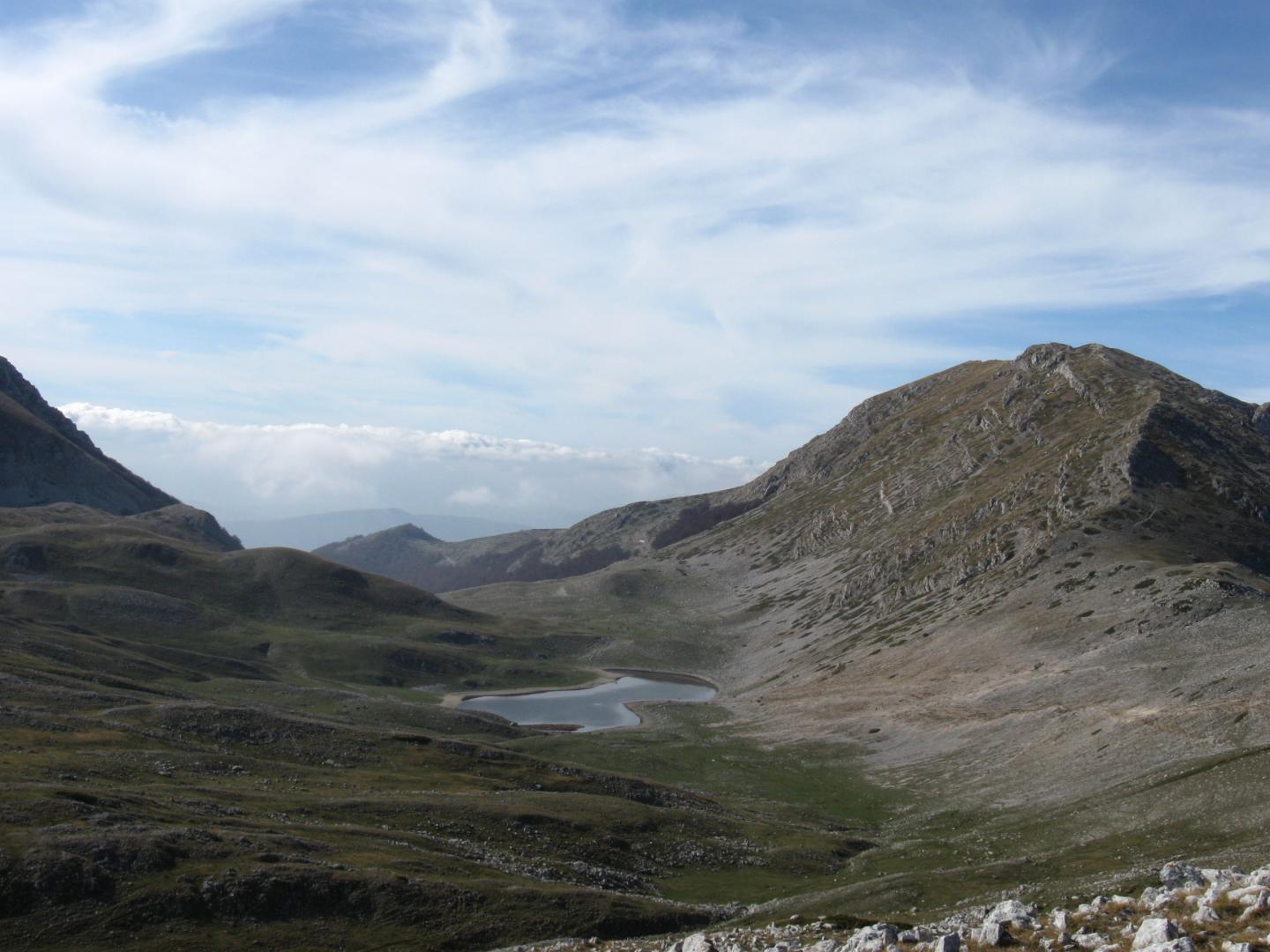 The Park, located in the heart of the Apennines, extends over the territory of three regions: Abruzzo, Lazio and Marche, including five provinces in its perimeter: L'Aquila, Teramo, Pescara, Rieti and Ascoli Piceno, and 44 municipalities. It is a hinge territory between the Euro-Siberian region and the Mediterranean region, where the highest mountain of the Apennines is located, which contains the only glacier of southern Europe. The geographical position, the height reached by the mountains, as well as the different geology of the reliefs: limestone and dolomites on the Gran Sasso and the Gemelli Mountains, sandstones and marls on the Monti della Laga, determine an extraordinary wealth of animal and plant species, as well as a variety of unique ecosystems and landscapes. 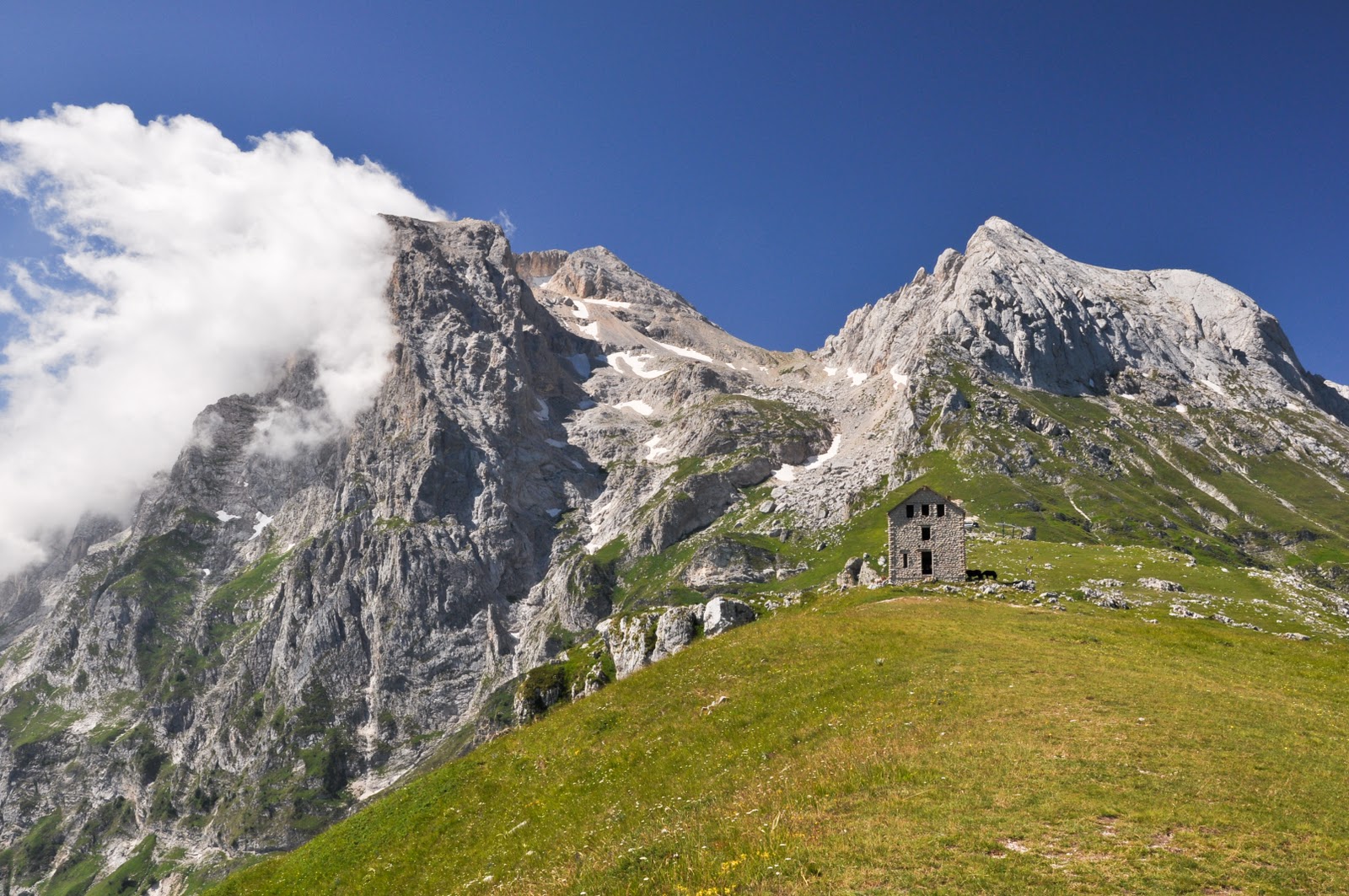